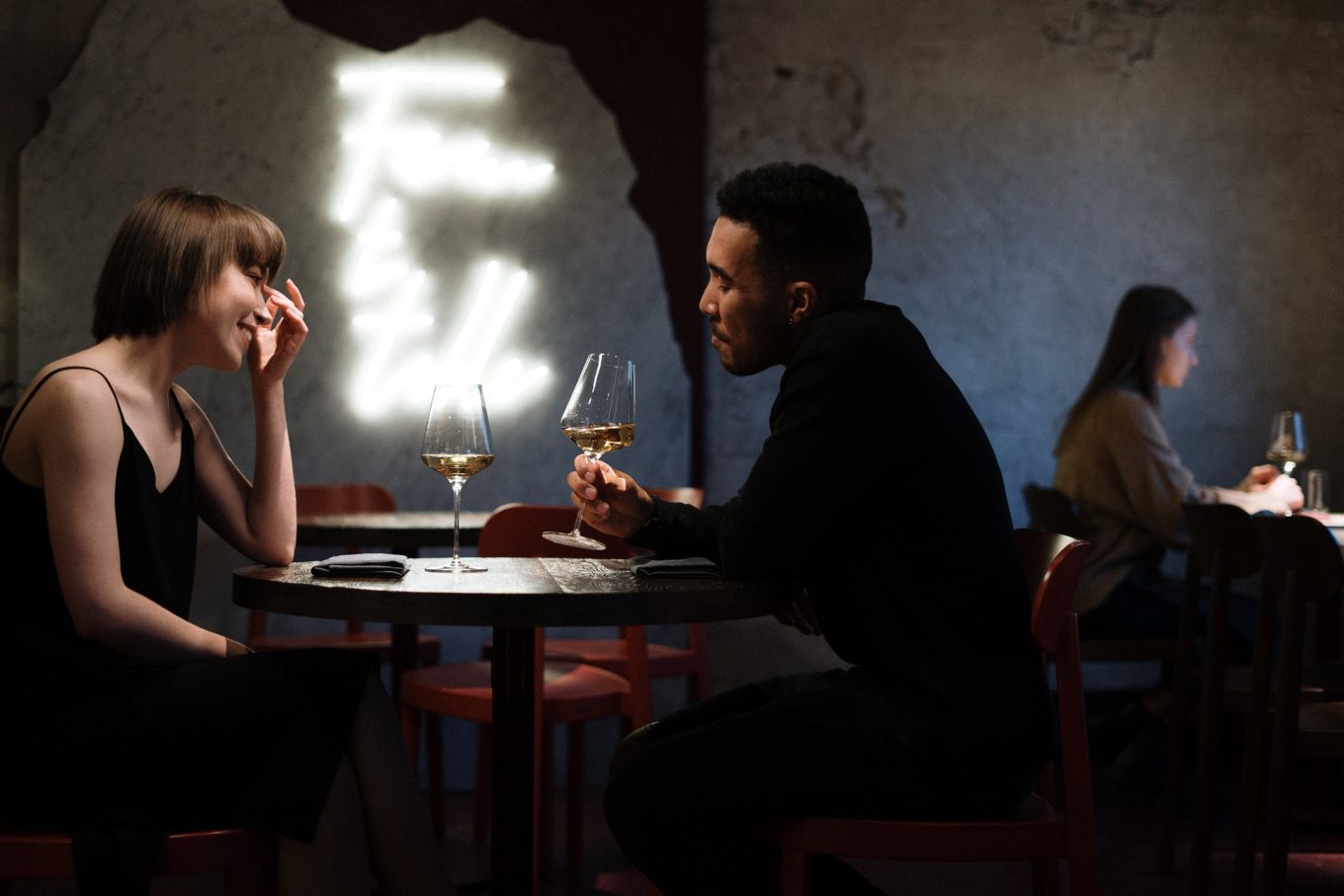 a short story by Jus Tri

She thought her first kiss was supposed to be magical. Her heart was supposed to flutter; her insides tense and clench. Her fingers were supposed to explore hairlines and pants’ pockets. Instead, she stood there dumb, and although she did want another kiss, it was only to experiment: did kissing improve upon frequency? Would a second kiss spark interest? Butterflies? Sweaty palms? She decided not to attempt a second kiss, knowing he would anyway.

He did: again on the mouth, then her cheek and forehead, and again, she stood there dumb.

The train came. She stepped on, arrived at the main terminal and texted him about her safe arrival. Without acknowledging her safety he asked her, “Did you enjoy the kiss?”

Her face contorted. Well, yeah, but did she? She should have. She would be lying if she said she didn’t feel tingly somewhere because she felt tingly everywhere, but this felt too much like lust. She’d never been content with lust.

What surprised her most was how vulnerable that kiss made her feel, especially for all its mediocrity.

She knew. She definitely knew physical acts of passion create far more vulnerability than spoken word would ever incite because, yes, talk is cheap; but talk is an indication of soul: of philosophy and morality.

No, no snap judgments, but he had used the word ‘retarded’ to describe the males she had previously dated, and although she was not their biggest fans they were more boring and lifeless; undeserving of insensitive slurs. Then he’d told an anecdote about how he once threatened to rape a girl because she annoyed him but he-would-never-do-that-because-that’s-wrong-and-he’d-only-said-that-to-scare-her-and-he-was-totally-just-joking. Then he bragged about being able to unhook a bra with one hand to which she’d casually replied, “I’m not even sure I could do that,” because she was unsure of how else to respond. He told her he did that to his ex-girlfriend. In public. Because it was April Fools’ Day.

Yes, she had wanted to kiss him again because she wanted the experience to improve — she had wanted to pull him in by his collar and press her colored, dry lips to his, but she refrained. Instead, she over-thought, double-checking all the red flags—

She doesn’t know him. If not the kiss, he could at least improve upon companionship. Right?

He’d taken her hand. He’d wrapped his arms around her shoulders and waist. He aligned his waist with hers. She’d let him do all those things, and she was embarrassed; she was flushed — she smiled at the ground like a OneDirection song, but she was unsure if this was due to him being so cavalier and handsome (which would obviously attract her), or due to the fact that no one before him had ever done this to her (which would naturally cause her to be embarrassed and flushed). She did not feel flattered like he said she would. She was curious — a word, she knew, would turn him on (curious ?? *kissy face emoji*), but a word she meant scientifically as in, ‘Is gold or silver the best electrical conductor? I’m curious; we must test it and record our findings.’

She looked up the word ‘curious’: (1) eager to learn or know; (2) inquisitive; arousing or exciting speculation, interest, or attention through being inexplicable or highly unusual; (3) odd; (4) strange ARCHAIC—made or prepared skillfully; done with painstaking attention to detail; careful, fastidious; marked by intricacy or subtlety. She frowned: his kiss should have inspired the archaic definition; it only turned out to arouse odd, strange speculations.

She had expected the kiss not because he leaned in close, or touched her, or because he was receiving the good vibes she sent him, but because he had given her two days’ warning. He also asked to make sure she was dressed cute. He asked to hear her voice beforehand. He asked if she was prude. His excuse for these words is his bluntness, the apparent foundation for his insensitive philosophy and morality: feigning strength and displaying ineptitude. I don’t wanna waste your time lol

She had felt safe enough around him.

She had felt enough. She wants to feel overflowing.

She doesn’t want to conduct scientific experiments; she wants to make love.

She’d have to look elsewhere, but how would she do that without—? Is he texting her again? What’s it say?

Hey I want to tell you something, I don’t think I can be in a relationship right now / I need to explore more of myself / for the time being / nothing wrong with you / I think it’s me we can still be friends

She grinned from ear to ear and replied: [truly,] you just made thid decision a lot easier for me; thank you, / **this

you took my first kiss, not my heart- no sweat: you have fun discovering yourself [:

If there were ever a time to believe in God!—now would be the time to believe for this was indeed a most-welcome miracle. She laughed gratefully — she could’ve kissed the ground. How amusing he’d thought she was looking for a relationship. She was playing along with him: he was vapid, so she mirrored his vapidity. Well, either she needs to clarify her body language, or he needs to adjust his reading glasses.

there’s no need to lie, she wanted to add to her text message, you don’t need to tell me you’re on a journey of self-discovery; ya’ll can tell me you just wanted da booty—it was written all over you. don’t say we can still be friends; i’m not entirely sure you’d know how to treat me as one anyway. But he wasn’t worth the explanation, and she did not want to condemn him.

He could make his choices and besides, he removed himself as a choice. Thank God, she would not have to choose him from among a crowd.