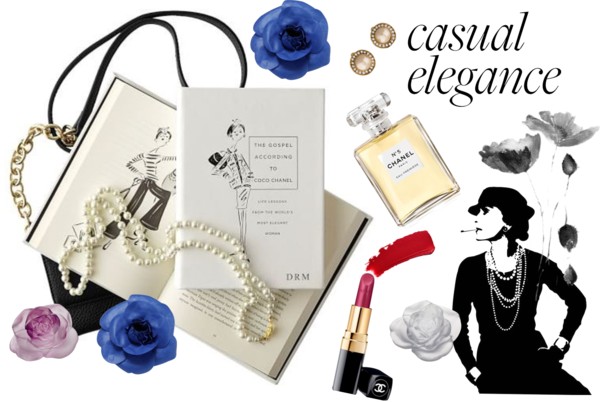 Life Lessons From the World’s Most Elegant Woman

As the Los Angeles Times wrote in their own review: “Reading Karbo is like listening to a dear friend talk about the legendary designer over brunch.”

This is exactly how I felt, even though most of the time I spent reading this book was during the morning and afternoon rush hour subway commutes between home and the office. Karbo is like that friend introducing you into the world of fashion, letting you in on some “Chanelore” (read: Chanel lore, or seemingly factual myths that surround the legend herself) and sharing some insider tips on how to live a Chanel-inspired lifestyle.

What’s most inspiring is that Gabrielle Chanel rose from rags to riches — and it wasn’t exactly a Cinderella affair, either (though she did have her fair share of scandalous affairs). Abandoned at an orphanage by her father, she grew up under the auspices of austere nuns and only made it out by learning from a young age how to make ends meet with the money that she made from odd jobs until she finally met the right people at the right time and sparked the connections that would launch her career and enable her to establish her fashion empire. Chanel was not traditionally beautiful, and she made no attempts at forcing herself to fit into a seductive femme fatale form that did nothing to flatter who she truly was. Chanel simply just was. She was beautiful in that she was brave and often made bold choices, and she was a femme fatale in the sense that she was sharp and focused as she was fierce and passionate about the men in her life and the pieces she designed. Coco herself is not without her faults (One of the pitfalls to her reputation was that she took a Nazi sympathizer as a lover during the German occupation in Paris). Karbo lays it out for us, sparing no scandal, and lets us decide for ourselves how we want to perceive the impeccable Coco Chanel herself. Admittedly, I didn’t know much about the woman behind the luxurious lifestyle and decadent designs, but I appreciate that this book gave me an honest picture of her… Well, okay. Karbo’s dishing it out for us is honest as it could be, considering that Coco loved to enshroud herself in mystery and mystique as part of her marketing strategy in connecting with high society and selling her beloved “dresses” (she called all of her designs “dresses,” even if they were clunky costume jewelry or purses). Overall, Karbo’s book on Chanel’s life is an enjoyable read and a great way to start off learning about the world’s beloved international fashion icon, who came from humble beginnings and used her passion and resources to build her empire, one little black dress and string of pearls at a time. She got her start creating comfortable riding breeches for women to wear when they rode their horses (she adored horses), and she set up her first shop selling boat hats made from straw that she adored with a simple embellishment, such as a peacock feather or a carnation carefully angled on the side. Coco then eventually moved on to reworking the suit and the blazer — traditionally apparel for men — to fit the feminine form. She experimented with new fabrics for everyday apparel (using jersey as the material of choice was a risky move, since people mainly used it to create underwear). To be clear, Chanel did not design for the high class, nor did she design anything specifically for the everyday woman and girl. Chanel designed to suit her own needs and her own tastes. Everyone else just followed. Other women, especially those in French high society, simply wanted a piece of the chic and were willing to shell out thousands of francs to pay for Chanel-inspired costume jewelry often made from glass beads.

To her credit, though, Chanel made clothing that were both stylish and sensible. Her designs liberated women from the overly expensive and constrictive styles that required a corset, layers of petticoats, and exaggerated hats that look like heavy fruit baskets on one’s head. Chanel loathed anything that looked ostentatiously ornate or silly, and she despised the frivolity of haute couture. According to Chanelore, this is why she emerged from her exile in Switzerland and moved the House of Chanel from Paris to New York City by the time she was seventy. Chanel relaunched her shop in Rue Cambon and created new collections, determined to take back the reins from the House of Dior and other designers who dared to undermine her decades of creative influence on style.

Chanel once declared: “I don’t do fashion. I am fashion.” If a particular dress or design did not exist, Chanel would dedicate herself to bringing these inspired ideas to life. Chanel also often wore her heart on her sleeve, rescuing her dear friends from ruined reputations (in spite of her own) and allowing herself to experience love and romance freely, fiercely, and passionately. At the same time, Chanel was also known to tear entire sleeves apart if the seams and stitches weren’t sewn to her specifications and satisfaction. Or so the Chanelore tells us.

Regardless of whether you love her or could care less about her, Coco Chanel remains an inspiration to generations of fellow designers, artists, and entrepreneurs building their brands and making their marks in the world of art, fashion, business, and culture. Before edgy was ever in vogue, Chanel made “edgy” elegant.