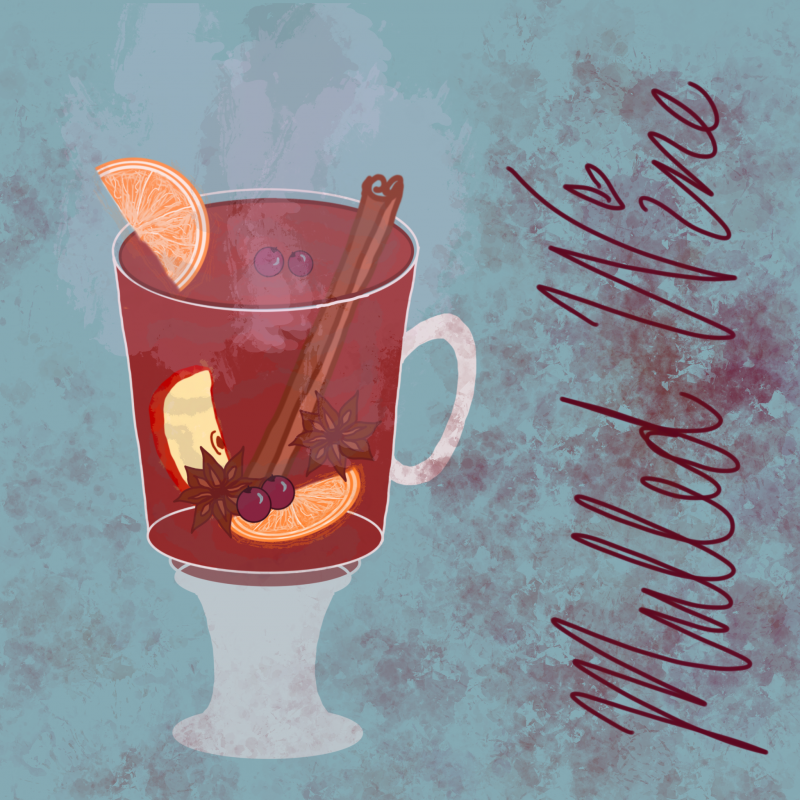 Mulling over the details of that project you need to submit while working from home? Attending a virtual holiday party and you find yourself strategically putting a plant in front of your webcam to hide your ugly sweater because you can’t turn off your video? Why not sip some mulled wine while you’re at it? The warm mug and flavorful spiced aromas may be just the thing to lift up your spirits this season.

A couple of weeks ago I went to a country house in Bethel, NY with my sisters and a couple of friends for a winter weekend getaway. We wanted to explore the holiday crafts market in Narrowsburg and just enjoy the views of the Delaware River, which runs along the borderline between New York and Pennsylvania. One of the fun activities we wanted to do was make mulled wine. I’d only drank mulled wine once before—last holiday season at one of my favorite French wine bars on Rivington Street in the Lower East Side called Jadis. Once December came, I knew that I wanted to try and replicate the warm concoction myself. And, of course, I also wanted to infuse my own magic and well wishes for the new year into the spiced potion while it was boiling on the stove.

What better way to spend a cozy evening in a country house than to make mulled wine while your friends start a warm bonfire in the backyard clay fire pit?

“Mulling” refers to the act of warming wine. Historically, the first version of mulled wine was created by the ancient Greeks, called “Hippocras,” which was made from dry wine sweetened with honey, spiced with cinnamon and cloves, and heated over a fire to guard against the winter cold. The ancient Romans expanded their wineries while extending their empire, collecting recipes and spices from different cultures as they conquered other regions. The Romans would dip hot irons directly into their mugs instead of simply heating their mugs over a fire—sounds efficient for a vast army that was always on the go, camping out in strange lands.

By the Middle Ages (circa the 1300s), long after the Roman empire dissolved and Europe developed into its own kingdoms and countries, each region had its own version of mulling, infusing variations of spices like cinnamon, nutmeg, cloves, cardamom, marjoram, ginger, and adding sugar and sweet syrups such as maple syrup or honey. Later recipes would call for citrus flavors from fruits such as oranges, lemons, apples, pears, raisins, berries, and also incorporated other spices such as star anise, vanilla, and fennel. Brandy or cider would be added for extra flavor and kick. It’s almost like a refreshing sangria in concept with the addition of fruits, except mulled wine is warm and comforting for the winter.

From a culinary technological standpoint, spicing the wines also provided a way to preserve the wines while also masking any bitter or sour flavors with sweet, fruity, and earthy depth. It made sense to use fruits from the harvest around the autumn season, mulling them in a wine of choice to fully enjoy the flavors of fall well into the winter.

Now that we know a bit of the culture and history of this beloved heartwarming holiday drink, let’s dive into the list of ingredients, shall we?

(Note: This post is not sponsored; when mentioning any specific brands or grocery stores, it’s just to let you know which ones I was able to access at the time when gathering ingredients during my trip.)

Although I wanted as much as possible to make it from scratch and not from any ready-made spice mix, I had no choice but to improvise this since I couldn’t find a jar or bag of whole cloves at Whole Foods—they only had ground cloves left on their shelves, which was not at all what I needed. A bit odd that they didn’t carry cloves in their whole form for an establishment that purports to have foods in their whole form (I checked the spice aisle as well as the organic produce sections, but couldn’t find any at all). Thankfully, I found a way to make the recipe work nonetheless. So I bought some organic mulling spices in a jar, which included the whole cloves as well as allspice, orange peel, lemon peel, and cinnamon.

After washing the fruits, I sliced up the blood oranges into thin slices. I cored the apples and left the peels on (for flavor and aesthetic) before I sliced them into thin wedges. You can also add a handful of cranberries and raisins if you like, for additional citrus and sweetness.

Once you have all your ingredients gathered and you finished the preparation stage, gently pour the red wine into your pot to warm it up on low heat. Then pour in your apple cider. Or, if you prefer a more spirited holiday kick, you can also add brandy. Let the liquids warm up for a minute, then gently plop in your fruits—the oranges and apples—into the pot, stirring the liquid so that the slices are covered and their full flavors can seep into the wine and cider. Next, add the tablespoon of honey, making sure that all of it gets dissolved into the liquid as you stir. Keep the stove’s flame at a low heat setting—you don’t want to have it bubble too much because you don’t want to burn off most of the alcohol.

As for the mulling spices, I needed a container to filter them through while the wine and apple cider were warming on the stove. I didn’t have a tea strainer or an herb ball with me at the time—I forgot them at home in my hurry to pack for the trip. Yet, a witch has to be resourceful and use what’s readily available to her, right? So instead I made do with a couple of pour-over coffee filters that I filled with the mulled spices and folded the edges and corners to seal them in as tightly as possible. I then rested these makeshift bags in a straining ladle, which was useful for both steeping the mulled spices in the liquid, as well as for scooping them out once the wine was finished simmering. It worked!

Stirring in warm wishes for the season

After that, I added the star anise and the cinnamon sticks to the pot. For some practical magic and kitchen witchery, I whispered my warm wishes for the season and the upcoming new year for myself, my friends, and my family, and then I stirred my ingredients clockwise as I closed my eyes and let the aromas fill my senses and bring me some cozy moments of calm. If you’re not a witch, close your eyes and think of all the things you’re grateful for—accomplishments, people in your life whom you respect and have helped you, the progress you’ve made. There’s a synergy that’s simmering as the steam and the scent of the spices tickle your nose.

Overall, the mulled wine should be done in about 20 minutes according to most recipes; others call for warming it on the stove for up to 3 hours, but it’s up to you. It took me about 5 minutes to prepare the sliced fruits, and then at least 15 minutes minimum to simmer the mixture. I decided to let it simmer for a bit longer—an extra 10 minutes—so the process took me approximately 30 minutes. I just wanted to make sure the flavors steeped in properly from the fruits and the mulling spices before serving. Use your judgment and what works best for you, while of course practicing common sense fire safety.

Once the mulled wine is finished warming, you can serve them up in glass footed mugs or mason jar mugs with a fresh cinnamon stick and star anise floating at the top for aesthetics. Or you can just pour them into any mug you have in your kitchen cabinet. What matters is whatever makes you feel warm, cozy, and comfortable inside.

Have a toast with your loved ones. Watch the steam rise, then close your eyes, breathe in the aromas, and make a wish as you take your first sip. Welcome in the comfort and let each sip soothe your soul. Repeat & enjoy!

May peace & hope bless your homes.

May your days be merry & bright.

Yuletide Greetings for a Solemn Solstice

How does one begin a reflection piece on the year 2020 and the meanings of the Winter Solstice during the holiday season? Do Hanukkah and..
Read More
Never miss a story
For Creatives, By Creatives
Follow Verge of Verse on Instagram for the latest stories, articles, and visuals to cultivate your creativity.
Follow Us