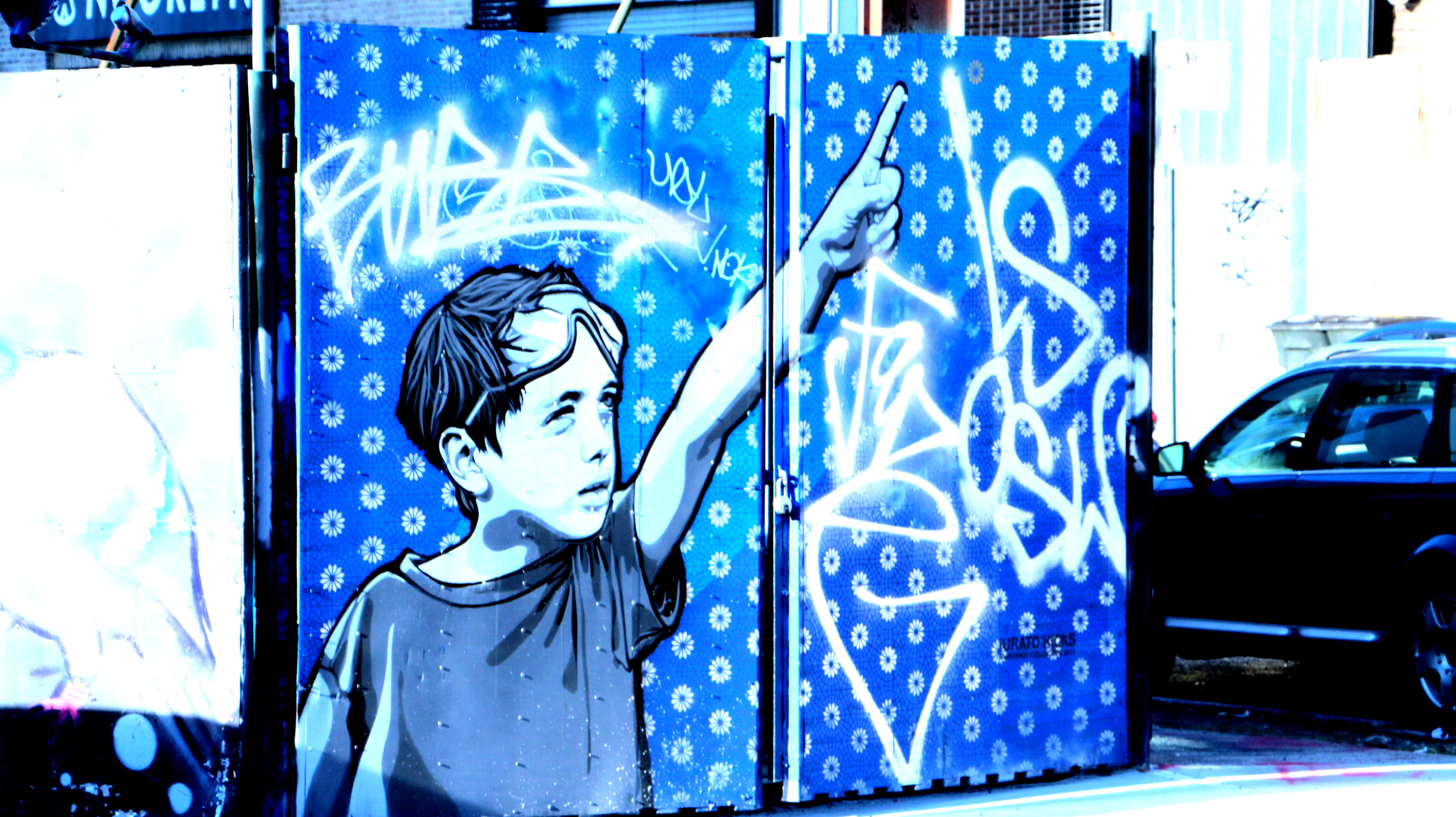 Andy could never sleep. Dreaming terrified him. Closing his eyes meant opening the gates to hell. Strange bursts of color would splash through his mind, followed by grotesque etches that would surface on the walls, their faces a blur with their eyes glowing, always watching his every move, judging him. At twelve years old, Andy was shy and socially inept; he really didn’t fit in with anyone at school. He didn’t feel normal. His mother sent him to the best psychiatrist she could afford, per the recommendation of the school psychologist. However, the medications weren’t doing much to decrease the nightmares. The nightmares only amplified his depression. All Andy wanted to do was hide away in some corner and be alone until he felt ready to come out and deal with the world. But he also didn’t want to worry his mother. So each day he still tried his best to pretend that things were okay, even though the air felt heavy around him and the mornings always looked gloomy. “You’re just another sucker,” one of the voices hissed as Andy was walking home from school. “Just like your father.” Andy kept his head down, unsure whether he should look up. Sometimes he would feel paralyzed, feeling compelled to sit down on a street corner and bury his face in his arms for a moment until he recollected his thoughts and found the strength to stand. Did the voices belong to the bullies who followed him, or were they coming from his own imagination?

The older kids from school thought it would be hilarious to prank him. One afternoon, they ambushed him. The older kids knew that Andy hated veering off his daily route. Andy hated disorder. He hated unpredictability. Getting lost would send him into a panic mode. They placed a blindfold over his eyes and led him to an unfamiliar corner, spun him around until he felt dizzy, then pushed him onto the middle of the street, and then ran off as they called him all sorts of unspeakable names.

It took a moment for Andy to regain his balance, tear the blindfold from his face, and catch his bearings again. He found himself standing on Scott Avenue, in the intersection where three industrial buildings towered over the road. Graffiti covered the sides of each building, even  the exterior of a white van parked right outside. The street signs crisscrossed in different directions yet at the same time demanded a full “Stop.” Andy sat on the ground and put his head down for a little while, relieved that they were gone. After a couple of moments, he looked up. There was a stenciled quote above his head that read: “If you don’t build your dream, someone will hire you to build theirs.”

Andy didn’t know what he wanted to do with his life. The only thing he wanted at this point in his young life was to be able to sleep properly again. To close his eyes and not worry about seeing the glowing eyes or hearing the hissing voices telling him that he won’t amount to anything or that he would end up committing suicide like his father.

But if Andy couldn’t get past the voices and the bullies, how was he supposed to build his dreams? He felt like an ant that could easily get crushed. When he finally got up and walked down the block, Andy met a street artist in the middle of completing his work: he was painting the mural of a woman whose eyes glowed as green as the eyes in the nightmares that would haunt him. “I paint what comes to me in my dreams,” he overheard the artist say to another onlooker who was watching him paint his mural on the brick wall. “It’s the only thing that helps me figure out what exactly I dreamed about,” the man said. “The only thing you can control is the need to feel control.”

Andy never thought of it that way, but somehow he felt better. Reassured. Granted, he was taking advice he’d overheard from a stranger in the midst of conversation with someone else, but did it really matter where those words came from? Andy recalled all of those images that constantly ran through his mind at night whenever he dared himself to shut his eyes. The walls of the buildings surrounding him were basked in the half-light glow of sunset, the other half obscured by early evening shadows. He grew a little dizzy looking up at all the images, the scribbles, the writings on the walls.

Andy walked down another couple of blocks, walking past trucks that were unloading their contents onto forklifts that weaved their way in and out of the driveways along the sidewalk. This wasn’t on his usual route home, but he felt somewhat safe. At least there were people on this block, and they didn’t really look suspicious or scary or out of place, since they were all busy working.

As he crossed the street and walked up the next block, Andy came across another image: a plain black stenciled quote that could easily have been missed if he had kept his head down and kept walking straight ahead.

Another Andy, in another place and time, uttered these words and posed this question: Andy stared at this wall. His mind focused on the letters, on the stenciled edges that didn’t quite meet the rest of the shapes yet still somehow managed to make a whole picture, paint a whole question. He wasn’t sure if the red arrow was meant to be a red flag, or some kind of sign sent by the universe to zoom in on this image, this question, this moment.

He took a deep breath, shut his eyes, and ignored the odd shapes forming behind his eyelids. He kept his eyes closed and focused on trying to see the words again in his mind, calling up the memory of the structure of those stenciled letters, the edges of where the ink stops and concrete flows, the corners of that lone red arrow.

Andy felt dizzy, but surprisingly, he didn’t feel as disoriented as he thought he would. Instead of thinking about creepy glowing yellow eyes, Andy chose to imagine that red arrow. He envisioned it multiplying, marching like a series of ants across his mind, pointing in different directions until they finally framed the question. Whoa, he thought.

Maybe it’s all a matter of control over the images. Control over changing those series of images to match our own creative vision. Control over how we choose to see the world. Andy didn’t know whether he’ll be able to sleep soundly that night or if he’ll suffer from night terrors again. But he felt that maybe, just maybe, if he tried hard enough, he might be able to close his eyes and conjure up images of his own choosing for once.

Andy thought that he could at least try to look up every once in a while. Maybe he didn’t have to sit in a corner and put his head down all the time. Maybe the world can look different, once he looks on the bright side.

Inciting Incident: Andy cannot sleep. He gets nightmares at night, from which he suffers insomnia and has a difficult time coping with every day life.

Plot Point #1: Andy has gone through school counseling, and he has seen a psychiatrist who prescribes him medications for his sleeping issues and his difficulty to cope with his anxiety/emotions. Andy chooses to go to school to try and keep his mother from worrying about him.

Obstacles: Andy’s obstacles are both internal and external. The bullies present an obstacle in that they harass him and make a fool out of him, simply because he’s an outcast. Internally, Andy is battling his fear of sleeping because of the nightmares he would get, as well as depression and the closure that he never received when his father committed suicide for reasons unknown to him.

Midpoint: While walking home from school, the bullies ambush Andy and blindfold him, leading him to an unfamiliar part of the neighborhood. Andy must overcome his fear of getting lost and losing control so that he can find his way home.

Plot Point #2: Andy is able to catch his breath and his bearings once the bullies have left. He sees the first quote: “If you don’t build your dream, someone will hire you to build theirs.” He’s encouraged by this at first, but then feels frustrated afterwards. How can he build his dream, if all he gets are nightmares in his sleep? Andy also encounters a street artist who casually talks about his motivations for painting the mural — i.e. that art helps him cope with creating meaning out of the images he sees in his dreams.

Climax: Andy sees a stenciled graphic on another wall — an Andy Warhol quote, which intrigues him. Andy stares at it for a long time, focusing on the words and the image itself, then tries to close his eyes and reconstruct that image in his mind, not allowing anything from his nightmares to distract him while he focuses on the quote and its image.

Denouement: Andy gains some closure from being able to manipulate some aspects of the quote image in his own mind. He gains a little confidence and feels a little bit more in control of his mind and what he chooses to see in his mind’s eye. Andy hopes that this might be a way for him to eventually learn how to deal with his fear of sleeping and overcome his nightmares, by learning that he has a choice and that he can choose to control the images that arise in his mind.