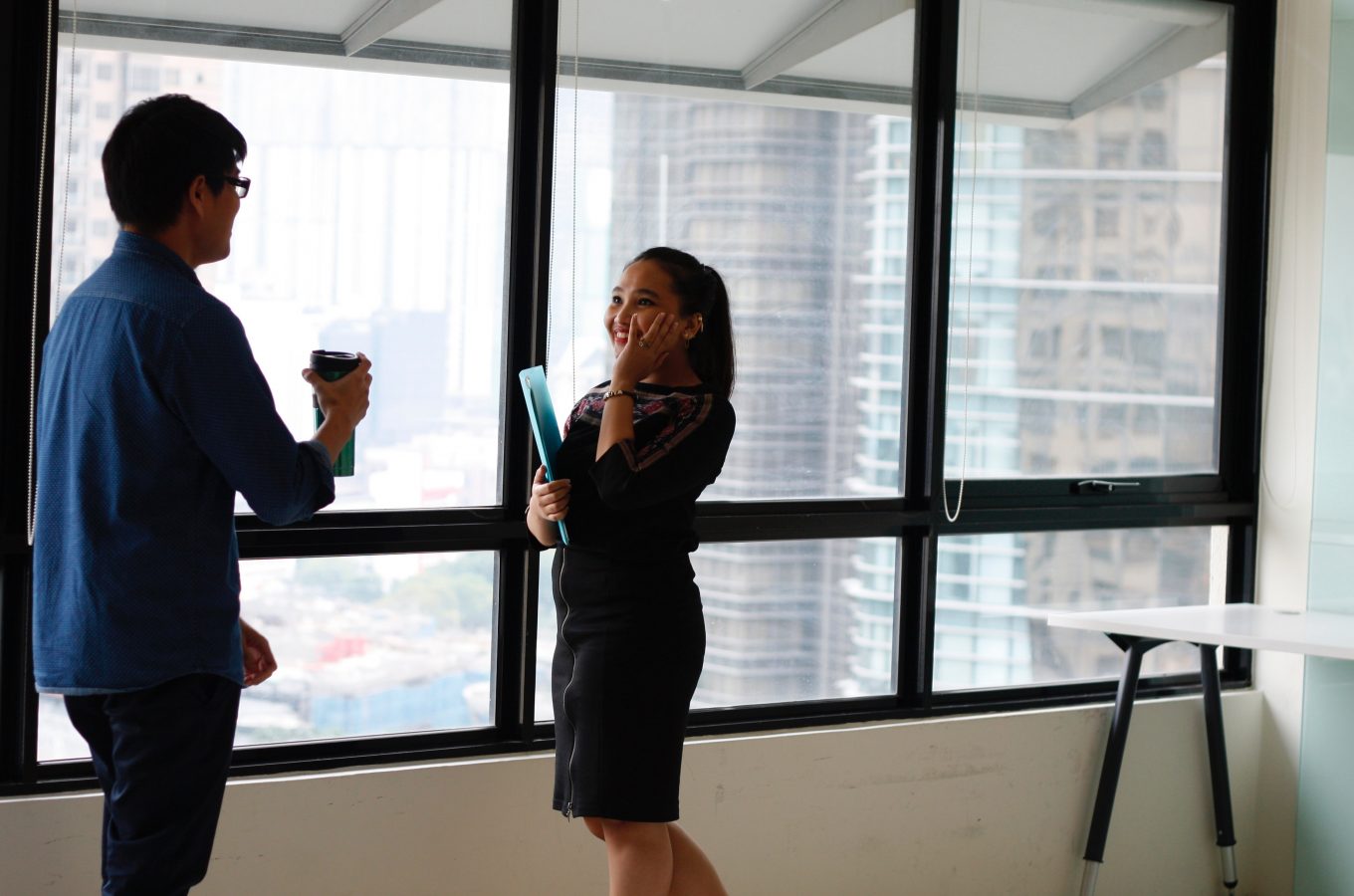 She was thrilled when the company transferred him to a new branch. With him gone, she wouldn’t have to expend any energy avoiding his dark eyes always squinting above a broad, warm grin. Thank God. She liked his smile too much to want to run into it (potentially) at every corner. The less her heart rate increased the better. She’s significantly too young for failure. Heartbreak was a risk she couldn’t take. Not now, when she really needed to focus.

She hadn’t even noticed he left until he suddenly returned unannounced. Just when she had forgotten his existence, she now has to find new spells to ward off his magnetism. I know you see me, his eyes fluttered. I do, squeaked her shoes as she turned on her heel, but I’d rather not.

He’d only returned for a week to help cover some projects until a new hire could take over. Thankfully, she was not a part of any of the projects that he temporarily oversaw. For the most part, his return was no different from his absence. But then he said her name. “Hey Justine,” he said, though when she turned to reply he was blushing clearly having meant to say, “Hey Janice.”

In the rare exchanges that she had to have with him his familiarity with her encroached on seduction. She did not humor him beyond a polite smile, thankful that was enough to deter him, but she still couldn’t help but stare. Yet despite her immediate and sudden attraction to every other crush that she’s had, he felt particularly dangerous. Not in the mysterious bad boy, drag-you-down-to-hell kind of dangerous, but athletic: once they had each other they’d just put their respective trophies on a shelf—any shelf—no matter what rank was earned. First, third, a blue ribbon; honorary mentions are a wasted possibility.

He said her name. She didn’t know he knew her name. He must know other things about her. She’d have to investigate. A date would be the best environment to investigate, and she knew he would say ‘Yes’ if she asked. She’d asked out enough guys to predict accurately their responses. Most men are not as complicated as their typical silence leads others to believe. Like her, men are simple creatures, fearful and often single-minded. The main difference is that within their locked hearts and growling stomachs, they deny urges that make them too similar to their prey. They pretend satisfaction although their prey is forced into therapeutic positions and rituals to unlock their hearts and fill their stomachs. She’d have to throw away the key and let this one starve. She wasn’t usually so quick to render deceased a potential love. She’d given far more chances to loves far less attractive in every other way.

He’d say that he’d love to go out with her and would probably admit his pseudo-surprise at her invisible interest in him. They’d immediately trade numbers, agree to meet at a restaurant she’d picked. She’d offer to split the bill but he’d already have paid in full when she went to powder her nose halfway through their meal. They’d take a quick walk around town. He’d take her hand and make sure she walked on the left side of the sidewalk. They’d reach her car but would lean against it, still talking about everything. She would snicker at one point, gazing at his mouth without realizing it when, eventually, he’d go in for the kill. The likelihood of his goodnight kiss on her cheek intensifying was inevitable, and she had no desire for any level of intensity.

Not that she had any other options. Not that he was an option. She certainly wasn’t an option for them. This was all in her head. She smirked as she thought, “Of course it is happening inside your head, Justine, but why on earth should that mean it is not real?” Applying fairly accurate conjectures to vicarious circumstances is, well, applicable to family and friends, but for herself? Surgeons don’t perform surgery on their own bodies, but anyone can apply a bandage to a wound. Anyway, he’d be gone again soon… only for another to take his place. Crushes were easily replaceable because their significance never went beyond eye candy. Although if she were honest, perhaps one heartbreak wouldn’t be too bad. Perhaps then someone would perform surgeries on her—someone who would volunteer engaging quips about how to handle pounding hearts and sweaty palms. Someone else could learn vicariously from her circumstances and apply their fairly accurate conjectures.

“Hey Justine,” he’d said. He had ignored his Freudian slip and continued without correction. She had considered drawing out his embarrassment, but that meant drawing attention to her flattered confusion and God forbid someone refers to them as ‘You guys!’ or should he say ‘We!’ No one, especially her, should entertain anything remotely plural or possessive regarding them.

One heartbreak wouldn’t be too bad. She knows there are worse things, but he’s hardly suitable for their first kiss—a first anything. The honor of her first heartbreak would at the very least have to be kissable. Freudian slips are too low a standard.