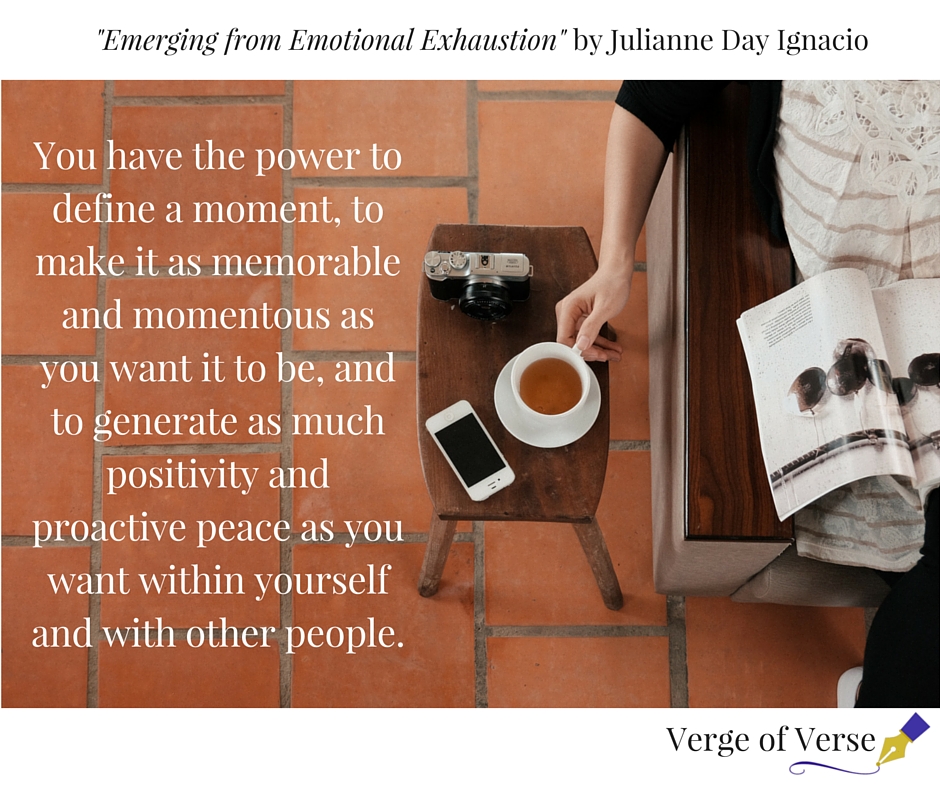 When 2015 first started, my life had undergone a couple of major transitions: I had moved to a new office location and inherited a slew of new job responsibilities, and I had ended my first-ever (dramatic on-and-off) romantic relationship. For a while, I kept finding myself in a cesspool of my own self-pity. I hated that I had been uprooted from my previous position, forced to relocate to another office in a completely different borough, all because the agency was restructuring the department. I loved working in Manhattan; I dreaded dragging myself throughout Queens for monthly site visits that I knew would drain me of whatever energy I had left. But that wasn’t what bothered me. I was used to adapting to new workplace policies, and this entire department restructuring was just another challenge I knew that I could tackle once I finally mastered keeping track of all the deadlines for my new case load and kept an organized planner to plan ahead and manage my time effectively. I was able to handle all of the changes at work despite my doubts that I could get through the piles of paperwork and stay on task. Work had become second nature to me. It felt exhausting, but at least it was familiar.

I would often cry myself to sleep and wake up from a bad dream that would just keep replaying in my head. The images would haunt me: the cheerful way in which he looked at me and kissed my cheek as though nothing was wrong when we said our “hellos,”  then later on when he laid out his “non-negotiable” terms on the table right before slinking away into the shadows of the crowd, disappearing as though he was a stranger on the subway I would never see again. As though those three and a half years of friendship and closeness were nothing more than a dalliance.

I felt cheated, and I felt cheap. I kept wondering what was wrong with me, why he didn’t want me. Was I not smart enough? Not pretty enough? Not endearing enough? Not caring enough? Not sophisticated enough? Why was I not enough? It turns out that I kept asking myself the wrong kinds of questions. This pathetic self-pity party had gone on for quite a few weeks. Eventually, I grew tired of it. Heck, I grew tired of myself. I never thought I’d admit this, but I was exhausted. Exhausted of my emotions. Exhausted that I was trying to extrapolate meaning out of all of it, while still feeling empty. My family members and closest friends grew weary of my complaints. They worried that I might end up like an embittered Miss Havisham still living in the shadows, wearing a white dress that has since lost its luster and waiting for a world of what-could-have-beens — a world that we all knew would never come. And trust me, I worried, too.

I thought to myself, “Who am I? Who am I to put myself in a position of self-pity?”

If I have the ability to bring a smile to other people, help others get the help they need to improve their quality of life, why can’t I do the same for myself? It was time to stop feeling so ashamed and insecure. I knew, that in order to overcome the obstacles, I had to embrace my emotional vulnerability as a transformative tool for turning my life around.

My outsides look cool, my insides are blue
Every time I think I’m through, it’s because of you
I’ve tried different ways, but it’s all the same
At the end of the day, I have myself to blame
I’m just trippin’

You can buy your hair if it won’t grow
You can fix your nose if he says so
You can buy all the make up that M.A.C. can make
But if you can’t look inside you
Find out who am I too
Be in the position to make me feel so damn unpretty
I’ll make you feel unpretty too”
—TLC

Everything that had happened up to that point, had happened for a reason. Or maybe a bunch of reasons. But do those reasons matter? Do they have to matter? Maybe I’ll find out one day. Maybe I won’t. What matters most in this moment is that I’m okay. I’ve made it this far. I can take it a step further.

Looking back, I wondered how I ever let myself drown in my doubts and my disappointments. I was like a snarling cat with a bramble stuck under its paw, licking her wounds instead of figuring out a way to pry the thorns out, let alone allow other people in my life to help me with its removal. I’m not proud of it. The open admission of it now, however, feels liberating somehow: I can be flawed and fragile while pretending to be fierce all at once. I don’t have to be perfect, but I can still learn from my choices because I am a complex, dynamic, multi-dimensional work in progress. I could have easily chosen to lay low and let the heaviness of loneliness hang above me, since that was the only thing that had shaped my reality at the time. But I didn’t. I knew, right down to my very bones, that I didn’t want to be that kind of person — always playing the victim, receding into her past and refusing to take a leap of faith to invest in better choices for her future.

If you ever find yourself in a similar position, hopefully one day you’ll wake up and remember that you — a unique and quirky and weird and wonderful individual — have a lot to offer. You may wake up and say, “Hey! I’m a capable person with many talents and her entire life still ahead of her.” I hope that you find your purpose, your passion, your pride. You deserve to learn from everything that this world has to offer, and you deserve to give yourself the opportunities to experience them, whether or not a lesson is involved. You need to forgive the past and just let yourself live.

The only path that made sense for me at that point in my life (ten months ago, really) was to follow the dream I had denied myself for so long: I applied to a Master’s program in Media Studies so that I can work in media and publishing in the future. A few months later, in early May, I finally received my acceptance letter and sent in my deposit. Since then, I haven’t looked back, except to reflect once in a while on my progress and make plans for my next steps. My entire focus has since shifted to finding out more about where my passions and talents intersect, and how to press forward to create more opportunities for my future. As you may or may not have noticed, things have been relatively quiet on Verge of Verse since the previous post. Right before classes started, I even went on vacation and took my aunt and cousins sightseeing; we went on a three-day bus tour to Niagara Falls, Philadelphia, and Washington, D.C. and bonded over inside jokes and silly photos we took of each other. It was this last fun-filled respite from the real world that I needed in order to start fresh with a new mindset before I fully entrenched myself in my graduate studies. It has now been nearly two months since I started attending classes, and so far things have been going well. I’m gradually adjusting again to managing my time between a full-time job during the day and going to class in the evenings as a part-time student. My weekends now consist of catching up with class, working out, and exploring different neighborhoods around New York City. Over the last few weeks, I’ve also had the opportunity to meet new people and make some new connections, both within and outside of class.

The world, it feels, is finally opening up, and I am finally able to step into a new field without worrying about anyone stamping out my creativity or my determination. My parents are now more supportive of my decision to change my career, and they have been a source of solace these last few months. I think we grew even closer as a family since one of my younger sisters went away for her military trainings. We bond over how much we miss her and call her whenever we can. In just a few more weeks, she’ll be coming back to New York to join us for Thanksgiving and the holidays.

Sometimes you find yourself missing someone who was always there for you, until one day they’re no longer there. Sometimes you’ll find that your saving grace were always the things that you took most for granted. Your family and friends. Your education and your career. Your creative streak and your passions. Your personal aspirations. You soon learn that these are the things you should never regard lightly. They might just lead you in the direction you never knew you needed.

Right now I’m just taking my time with figuring out my personal and professional trajectory, not worrying about whether I’m doing the right thing or whether I’m moving along on a preset path for success. I’m just enjoying life as it is — treating each day like it’s a new chance for growth and discovery, and letting go of the things I know are beyond my control. “Do what you can in the time that you have,” a friend once said to me. Whenever I find myself in a moment when I feel stressed out or down, I close my eyes and focus on those words.

Even if things go wrong, even if life doesn’t turn out quite the way you want it to, you need to remember that as an individual, you are a force of nature. You have the power to define a moment, to make it as memorable and momentous as you want it to be, and to generate as much positivity and proactive peace as you want within yourself and with other people.