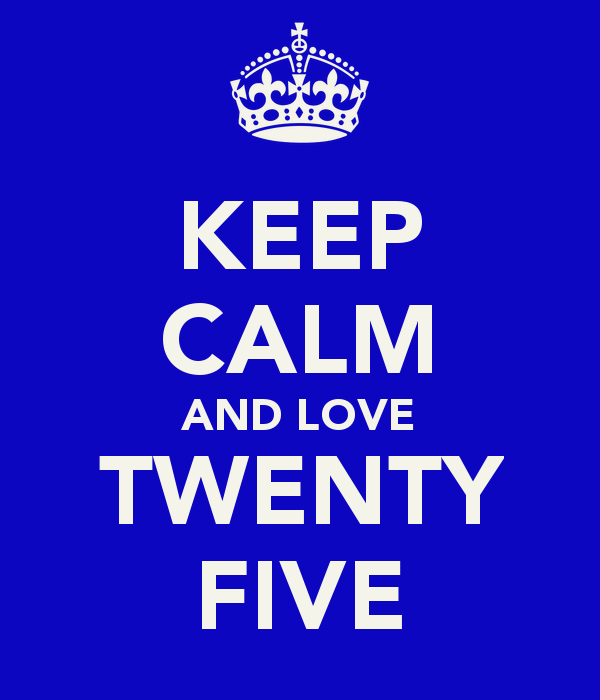 “You are now quarter of a century old,” my mother told me during my birthday dinner on Sunday, February 8th, just before we were about to slice my cake. My father and two younger sisters laughed as well.

A couple of months before that, I had made a similar joke with a friend and colleague who had just turned “half a century old” the day before Thanksgiving. Now I know how my colleague felt when he looked at me and pursed his lips, holding back whatever witty sarcastic reply he wanted to say but instead laughed it off. The word century makes me feel like I have an expiration date and I’ve already used up a fourth of my projected lifespan.

I don’t actually feel “old” until someone reminds me that I’m no longer a teenager in touch with pop culture (usually my younger sisters do a fantastic job with this). I rarely give a damn about what the new slang words and catchphrases are (I still do not fully understand the original context of “Bye, Felicia!” to dismiss someone). I also don’t care which auto-tuned dance mixes have made it to the American top 40 charts these days, let alone muster enough interest, time, and energy to watch another opportunity for celebrities to make attention-seeking spectacles of themselves during the Grammy Awards. Someone will always dress the best, and a few others will make a series of fashion faux pas that will haunt them for months on social media.

I also get reminders about what’s expected for people of my age range when someone else asks me why I still don’t know how to drive yet. I mean, I’ve owned a learner’s permit in the past, but I’ve never invested in taking a driver’s education course. As a true New Yorker, I walk and take public transportation for the following reasons: traffic is terrible, parking is too expensive and scarce in a metropolis like New York City, and owning a car is too financially fussy when it comes to loading up gas and paying for auto insurance.

Some people tell me that I ought to move out of my parents’ household and be living in my own apartment already. Trust me, I so wish I can afford to live in my own place and be able to afford groceries and utilities while going to graduate school with a little bit of savings left over for a vacation in sunny California. I want to live in my own apartment and have financial independence and stability while pursuing my passions without having my mother tell me that 10:00PM should be the maximum time that I arrive home from a girls’ night out on a Friday or Saturday evening. Alas, some sacrifices have to be made for the time being until I can financially support myself.

Others tell me in a playful tone that I ought to be out and about dating and husband-hunting before I reach the age of thirty – in which case, I tend to shudder and cringe at the thought. Something about this description of the dating realm feels like an antiquated wildlife documentary. I’ve always imagined a budding romance as an earnest and organic sequence of events that leads to meeting someone and deciding to build a healthy relationship based on mutual love and trust. The last thing I want is to have my mother mention a friend of hers who has a son around my age and… well, I’d rather not hear the rest. All of these jokes assuming that I ought to be dating someone at my age, getting married, and then having babies before I’m thirty – all of these jokes have certain assumptions and expectations attached to all of them. All of these feel so… trite. Sure, I may joke about getting older once in a while, but I don’t entirely mean it nor believe it. I still have so much more to learn, and so much more to do. As a young woman still getting her feet planted firmly on her own ground, and who is still sowing the seeds to ensure that her future endeavors take root, I find that adhering to some of these social timestamps are arbitrary.

No matter what age you are, your number should not solely define your essence and capabilities as a person. You are a soul still trying to search the world to experience it and discover yourself. Even if you graduate with your bachelor’s degree by the time you’re in your late twenties or thirties, who cares? So what if you’re not married yet? This isn’t the Victorian era anymore, and you can spin your entire life exactly the way you want it to be spun without fear of being shunned as a “spinster.” And if people talk, let them. At least you know you’re interesting enough to be a subject of conversation to fill the void in their lives, whereas you’re just focused on living yours exactly as you want to live it. We each travel on our own trajectories and have destinations that we have yet to reach beyond our dreams.